We first met Lou Dials at a sports collectors convention in Northern California when I helped him to bring his items into the convention center. Lou and I instantly became good friends and as I spent time with him at subsequent conventions we became like family. I called him "Grandpa Lou" and he called me his "Buddy". Lou taught me so much about so many things over a relatively short amount of time. 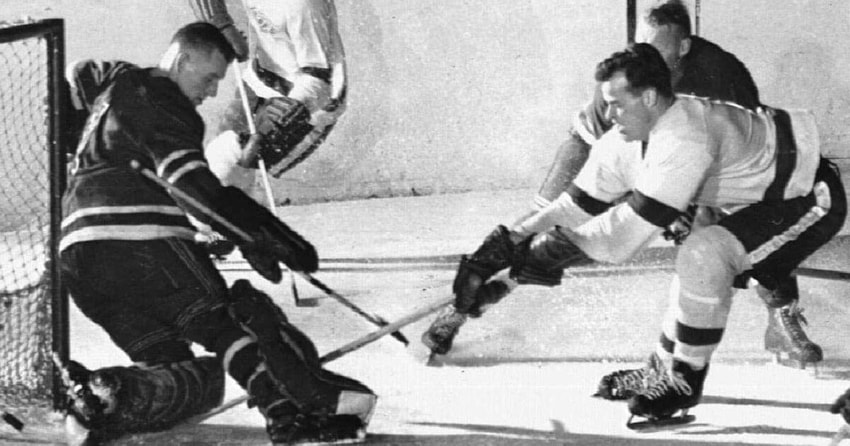 Former professional hockey player Gordie Howe earned the fame of being the most durable player of all time, playing twenty-six seasons for five decades in the National Hockey League. During that time, he was one of the game's most productive scorers.

During the 1990's we had the once in a lifetime opportunity to work with one of the greatest athletes of all-time, Gordie Howe. Although Gordie was one of the biggest legends in sports, he was a very kind and humble person who loved spending time with his fans.  Gordie had an amazing sense of humor. We also got to know his wife, Colleen and his sons Mark and Marty who also played in the NHL. They are one of the kindest and classiest families that I have ever met. 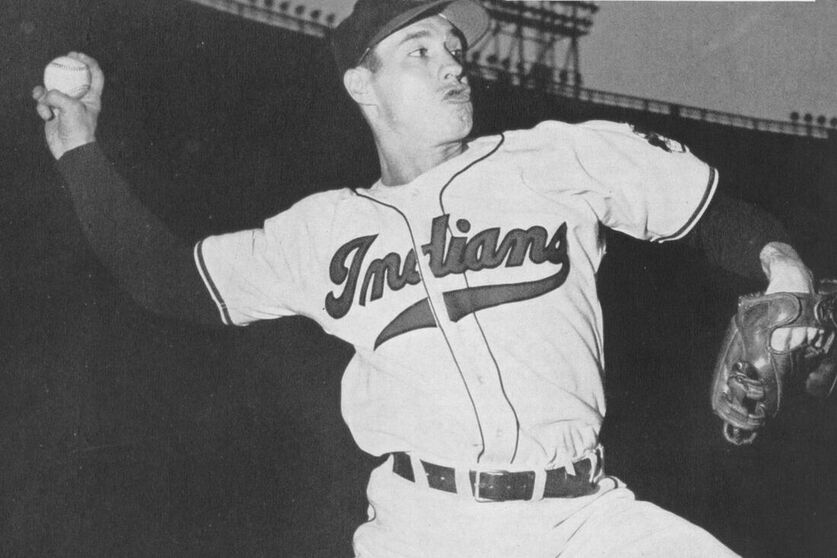 When I first met Bob Feller as a sixteen year old kid, I did not realize that I was spending time with one of the greatest pitchers in the history of baseball. Feller put up amazing numbers even though he missed four seasons to serve his country during World War II. Bob Feller absolutely loved spending time with his fans. Although he was a legend, Bob Feller was proud of his accomplishments but incredibly humble. 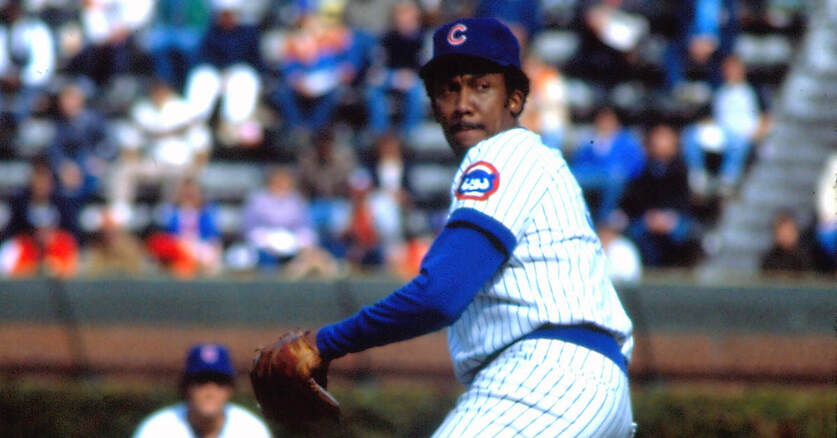 ​Ferguson Arthur "Fergie" Jenkins CM (born December 13 1942) in Chatham, Ontario, Canada) is a Canadian former right-handed pitcher in Major League Baseball. He spent most of his career with the Chicago Cubs, and also played with the Philadelphia Phillies, Texas Rangers, and Boston Red Sox.

Fergie Jenkins is another all-time legend who is incredibly humble and kind to everyone he comes in contact with. It was an amaazing experience spending time with Fergie and his wife at an appearance that we were involved in. 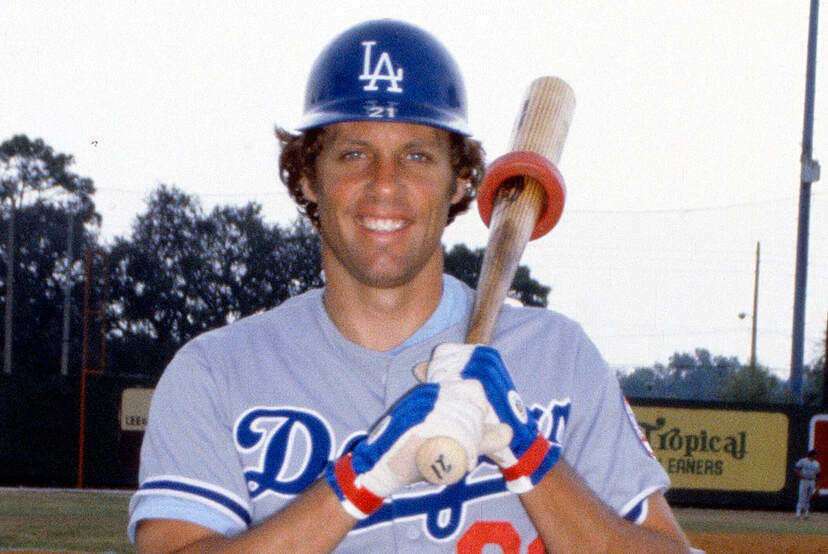 Johnstone was a member of two World Series teams with the Yankees in 1978 and the Dodgers in 1981. He was known as a versatile outfielder with a good sense of humor, known for keeping clubhouses loose with pranks and gimmicks. He later served as a radio color commentator for the Yankees (1989–1990) and Phillies (1992–1993), and wrote books about his career.

Jay Johnstone was a great friend of mine for over twenty years. We first met Jay at several sports collectors shows during the 1990's. Jay was known for his great sense of humor and ability to make people laugh. As a teenager Jay once gave me a batting lesson right in the middle of a convention.

Several years later Jay established a successful business that provided auction items to charities, just like I do. But Jay and I were never "competitors". He offered me advice and encouragement about my business. Although we hadn't seen each other in years Jay called to check in on my dad when he was sick and that meant a lot to me. 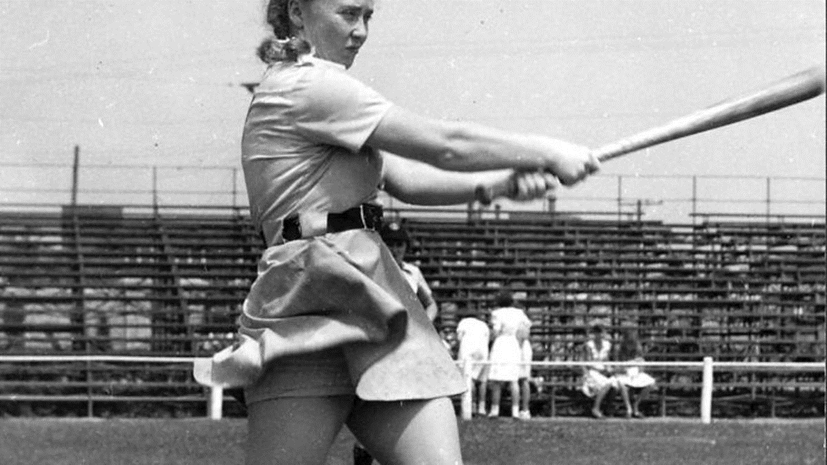 Pepper Paire Davis
Pepper was a fine catcher in the AAGPBL and she had a very high fielding average .977. She was a steady influence behind the plate and handled the pitchers very well and was always able to get the best out of them. Pepper was the co-writer of the Leagues song with Nalda Bird Phillips that the players sing at each reunion.

Pepper was one of the baseball players who Gina Davis' character was based on in the movie "A League of Their Own". I first met Pepper and the other League of Their Own ladies when I was about 15 years old. Pepper, Lefty, and the other ladies allowed me to be the "Official Distributor" of their signed memorabilia at card shows. I was so proud of this that I had a sign made!

Pepper was a great friend to me and my dad. Although she was in her seventies when I spent time with her, Pepper was very young at heart and also very funny. At a gathering after a convention Pepper once asked me to get her a beer. I got her one but for some reason it was 95% foam and 5% beer! We all laughed very hard at that. 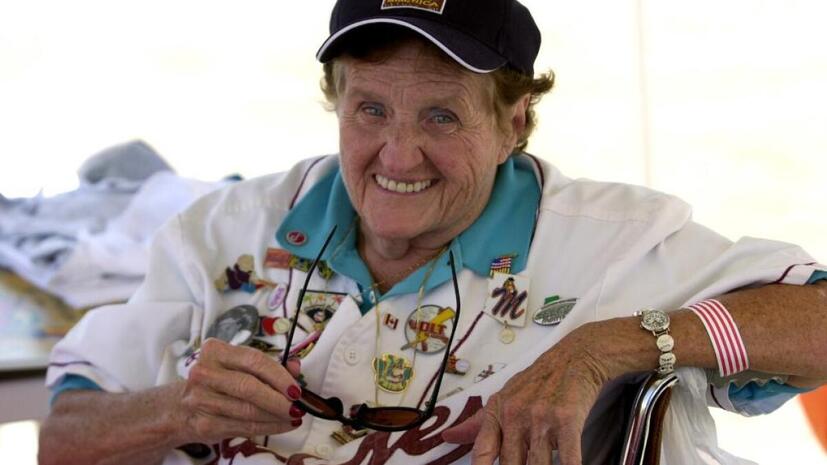 ​Lefty played first base for the Comets with a good arm. She graduated from Ohio State in Physical Education. She played basketball and field hockey. Alice also had a hobby of singing and writing songs. 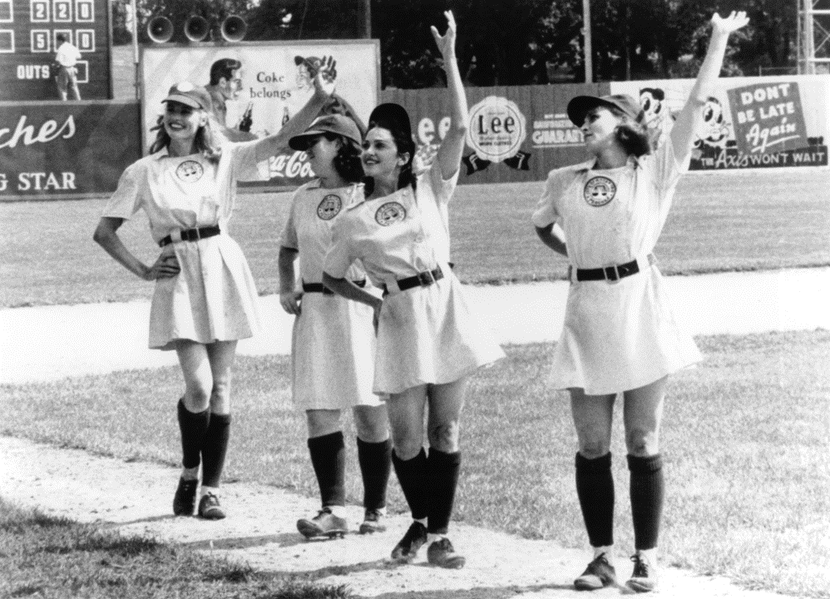 ​For six seasons, between 1944 and 1950, the West Los Ange]es native played center field and occasionally pitched for the Minneapolis Millerettes, the Fort Wayne Daisies, and the Peoria Redwings. "She was a great all-around ballplayer," said Lavonne "Pepper" Paire Davis, Dancer's former teammate and lifelong friend.

Labeled a "fly-catching genius" by sportswriters of the day, Dancer "could go back on the dead run, catch the ball over her shoulder, wheel  around and in one motion throw a strike to the catcher in the air from deep center field," said Davis.  Dancer also was known for her hitting and base stealing.  In 1948, she stole 108 bases.

The character that Madonna played in the movie "All The Way May" was partly based on Dancer who was known as "All The Way Faye". I became friends with Faye and the other ladies as a teenager but unlike many adults, they did not look down at me or treat me like I didn't know anything because of my age. That went both ways and I respected them and didn't treat them differently because of their ages either. I have great memories of talking with Faye about baseball and many other things. 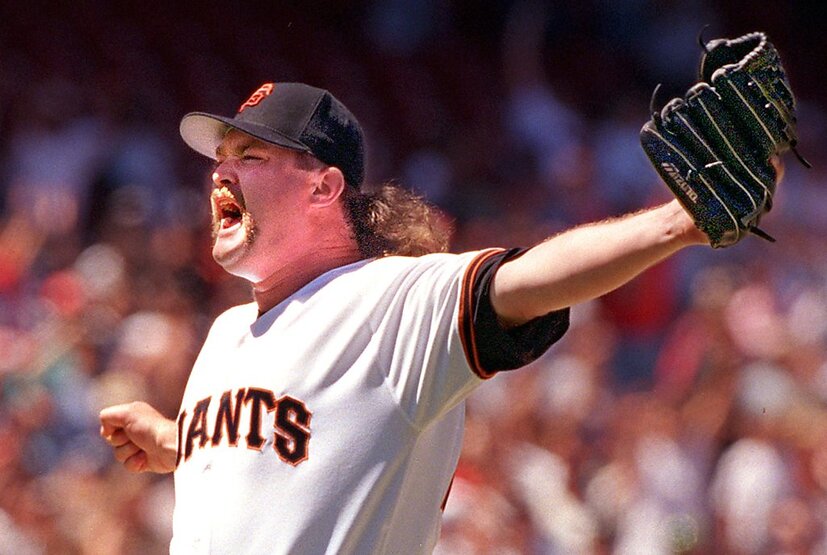 Rod Beck was hands down one of the coolest people I ever met. As a young teenager I was a big Giants fan and Beck was my favorite player so it was amazing getting to meet him. When I said "It's nice to meet you, Mr. Beck", Rod quickly replied "Don't call me Mr. Beck." One of the things that Beck was famous for was his mullet hair cut. As a young teenager I had the same hair cut as Beck and I commented to him that his looked good. "It isn't supposed to look good, kid" Rod replied.

Even at the pinnacle of his career as one of the most dominant closers in baseball Rod did not behave like a "star". It's hard to explain but he acted like he was one of us. No better and no worse. Rod was a one of a kind person who we lost way too soon. 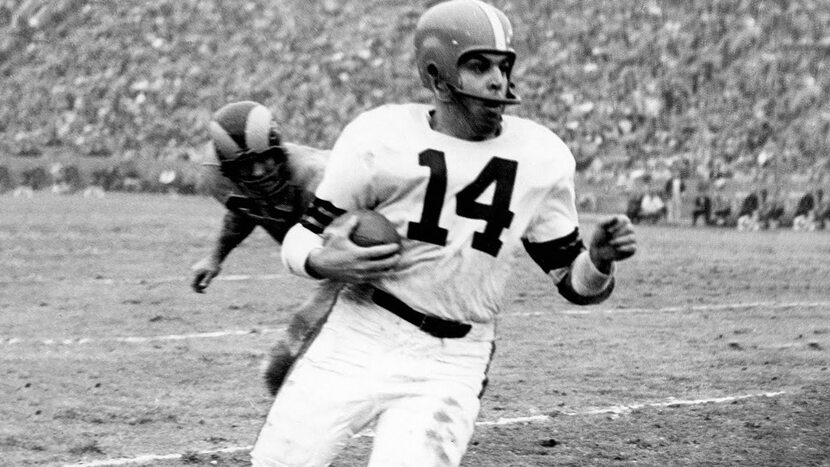 Otto Everett Graham Jr. (December 6, 1921 – December 17, 2003) was an American professional football player who was a quarterback for the Cleveland Browns in the All-America Football Conference (AAFC) and National Football League (NFL). Graham is regarded by critics as one of the most dominant players of his era, having taken the Browns to league championship games every year between 1946 and 1955, making ten championship appearances, and winning seven of them.

When I was about 15 years old I was at a sports collectors convention and the promoter asked me to help out by sitting next to one of the guests and passing the items to be signed to him. At the time I had never heard of Otto Graham but I agreed to help out. Little did I realize that I was sitting next to a man who was the greatest quarterback of his era and one of the greatest of all-time.

Otto Graham and I had a great conversation that day which I will always remember. At the end of the day he signed a photograph for me with an inscription thanking me for my help. Today his signature is worth a lot of money but it is one of my favorite items and I would not sell it for any amount. 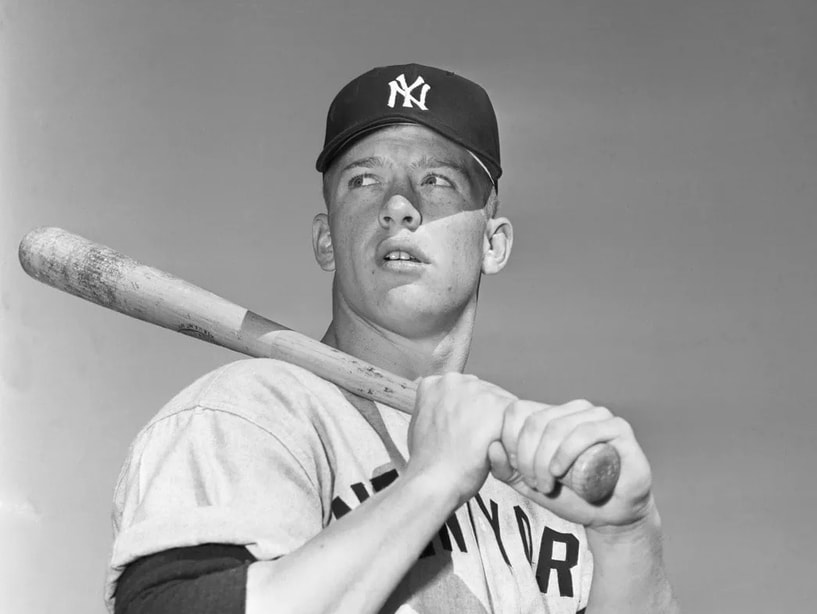 Almost thirty years later, I am still in disbelief that I got to meet the great Mickey Mantle several times at various appearances that he made. I first met him in the lobby of a hotel. He and Yogi Berra were standing there talking and when Yogi stepped away I approached my all-time favorite ball player and said "Hello Mr. Mantle". He was extremely kind and spent some time talking with me before he gave me a card that he had signed. Meeting Mickey Mantle was one of the greatest moments of my life. 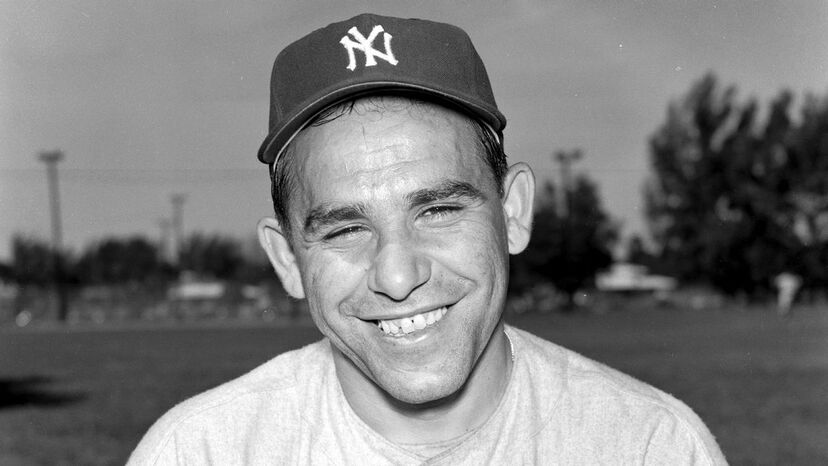 ​Lawrence Peter "Yogi" Berra was an American professional baseball catcher who later took on the roles of manager and coach. He played 19 seasons in Major League Baseball, all but the last for the New York Yankees.

Similar to Mickey Mantle, Yogi Berra was an all-time legend and I was in disbelief that I got to meet him several times. One day my dad told Mr. Berra that as a kid, he had spent many days bowling at "Berra Rizzuto Bowl", a bowling alley that was owned by Berra and fellow Yankees legend Phil Rizzuto. Berra spent a lot of time talking with us and he signed a bunch of baseball's for us with his full name as well as other special inscriptions, something that he never did at the time. 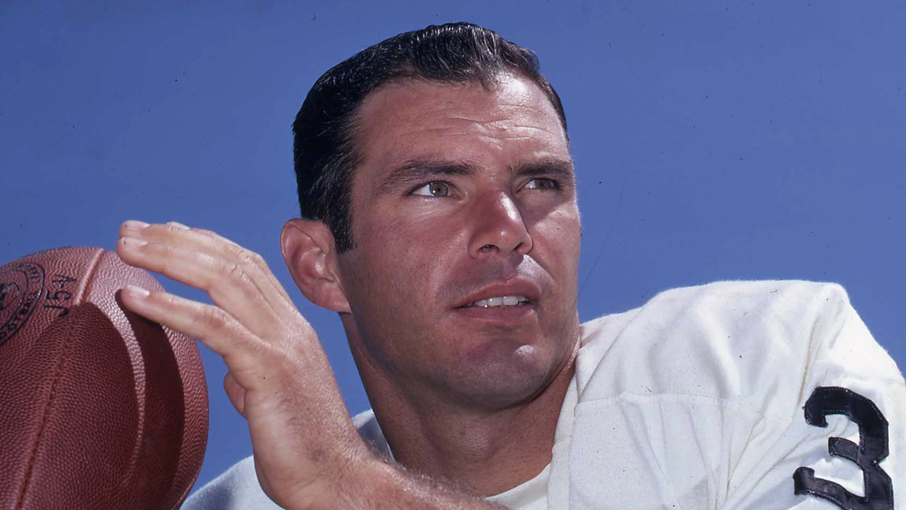 ​Daryle Pasquale Lamonica (born July 17, 1941) is a former American football quarterback who played in the American Football League (AFL) and the National Football League (NFL) for 12 seasons, primarily with the Oakland Raiders.

Even though my team is the Seahawks, I have to admit that one of the coolest group of athletes that I have ever met are former Raiders. One day at a convention, Daryl gathered several people and recreated the famous "Heidi Game", a famous contest between the Raiders and the New York Jets when the television cut away from the game's exciting ending to show the movie "Heidi". I am one of the few people who got to "see" the ending, recreated by one of the best players in the game.

Other Raiders who I met and got to know include Todd Christensen, Ken Stabler, Ben Davidson, Jim Otto, Cliff Branch, and Lester Hayes. Although these Raiders were known as some of the toughest players in the game, I have never met a kinder and nicer group of people.